Entry 101: Mr Brown– What’s in a name? That which we call a rose/ by any other name would smell as sweet, Romeo famously declaimed. What’s in a name, Romeo? Quite a lot, actually. He was not the sharpest tool in the shed even if he was, arguably, Verona’s most eligible bachelor. Suppose, taking a leaf out of Romeo’s book, you decided that a rose was to be called a stench. A dozen stenches just for you, darling! Does not sound as sweet, and I dare say, the connotative transfer would attenuate somewhat the perfume perceived by the recipient of your well-meaning romantic gesture. 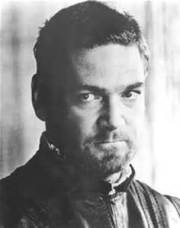 Consider the flipside of this, where honourable words cloak dishonourable intentions as in Shakespeare’s great tragedy, Othello, where Iago draws the naïve hero down into his devilish trap by pretending to withhold, for noble motive, the name of the person rumoured as having seduced Othello’s wife, saying, Good name in man and woman, dear my lord,/Is the immediate jewel of their souls./Who steals my purse steals trash; ’tis something, nothing; /’Twas mine, ’tis his, and has been slave to thousands;/But he that filches from me my good name/Robs me of that which not enriches him,/And makes me poor indeed.

In The Crucible, Arthur Miller’s play about the Salem witchcraft trials of 1690 as a

commentary on the poison of McCarthyism in 1950s America, John Proctor, the play’s flawed protagonist cries, Because it is my name! Because I cannot have another in my life! Because I lie and sign myself to lies! Because I am not worth the dust on the feet of them you have hanged! How may I live without my name? I have given you my soul; leave me my name!

The magistrates, who had hanged a dozen innocent people on the word of hysterical girls, were desperate to get his confession because of his stature in the community and, thinking that they had succeeded,

bring him the paper to sign so that they might display it for all to see on the church door. But Proctor, ultimately, refuses to blacken the names of the others by denouncing them as witches and, with them, is led to his death.

Naming rituals have been important in all cultures and at all times. Christians confer names at baptism, and some at Confirmation. Hindus, Jews and Muslims all name their children within days or weeks of birth. Many non-believers, too, have secular naming ceremonies. If you’re into secret names, you may wish to join a Wiccan coven where you will receive your Craft-name to be used only among others of your faith during ceremonies performed away from public gaze.

Other secret names are to be found in a variety of sub-cultures; and let us not forget lovers

who would be discomfited if their pet-names of, say, Snugglie-poos and Cuddle-cakes were widely known. Not only people, but place-names are causes of dissension: in the province of my birth- Ulster- it is still possible to witness apoplectic arguments over the proper name of the city on the River Foyle- is it Derry or Londonderry? Or Stroke City as local radio presenter, Gerry Anderson dubbed it, as wry acknowledgement of the clunky but widespread usage Derry/Londonderry as a compromise solution to the conundrum.

Post-colonial renaming of African and Asian countries and cities has proceeded apace since the mid-twentieth century: are you enjoying a cup of Ceylon tea from Sri Lanka, perhaps as an accompaniment to your tasty Peking duck, a delicacy prepared in Beijing since the imperial era- or do you like something stronger -Bombay Gin, mmm? Even at a parochial level, tempests rage in innumerable tea-cups over the naming or proposed renaming of streets and parks.

And the imbroglio extends to the metaphysical: naming the Deity has been a no-no for

pious Jews from Biblical times who refuse to pronounce the ineffable name of God or G-d, as they prefer to put it. It is rendered as the four consonants YHWH or YHVH (known as the tetragrammaton) which transliterates to Yahweh or Jehovah.

It is also unwise to bandy about the name of the Adversary or Devil: the harmless-seeming idiom, speak of the devil! when someone you

have just been talking about puts in an unexpected appearance derives from an earlier saying, speak of the devil and he doth appear.

Yesterday, I lay awake in the palm of the night./A soft rain stole in, unhelped by any breeze,/And when I saw the silver glaze on the windows,/I started with A, So begins The Names, a poem by Billy Collins and he proceeds through the alphabet: it wasn’t until he reached X that I twigged that this was a special poem: (Let X stand, if it can, for the ones unfound). The last line, so many names, there is barely room on the walls of the heart, underscores the sorrow: a naming of some of those lost on 9/11. 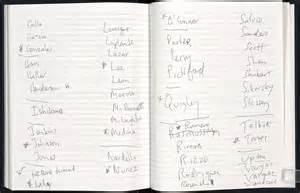 So, what’s in a name, Romeo? Quite a lot, actually.