Entry 108: An Impervious Wall– Before I built a wall, I’d ask to know/What I was walling in or

walling out,/And to whom I was like to give offence./Something there is that does not love a wall, that wants it down. Truly spoken, Robert Frost. Another poet, W. H. Auden wrote about Hadrian’s Wall in Roman Wall Blues, where he captures the loneliness and misery of sentinels the world over throughout history as they stand vigil on their particular wall and peer into the mist for signs of the enemy, The rain comes pattering out of the sky,/I’m a Wall soldier, I don’t know why.

There is something about walls that engender complacency- in Edwin Muir’s poem, The Castle, the besieged look unconcernedly from the turret walls surrounding the fortress at the foe half a mile distant confident in the knowledge of their ample provisions, brave defenders, stout fortifications and allies drawing near. But… There was a little private gate,/A little wicked wicket gate./The wizened warder let them through. And why? Our only enemy was gold,/And we had no arms to fight it with.

So-called Chinese walls in financial, commercial and legal institutions are supposed to guarantee probity in matters where conflicts of interest may occur but this does not stop regular breaches of the walls and laws in all of these sectors. The actual Great Wall of China

is stupendous to look at but failed miserably in its purpose of keeping out determined invaders, who simply rode around it or had its gates opened by traitors. The Berlin Wall failed and one may surmise (indeed, hope) that similar walls still in place around the world, will ultimately fail, too.

Something there is that does not love a wall. Are you listening, Donald Trump? Walls made of unobtainium remain the ideal of oppressors throughout time and place. Such a wall would 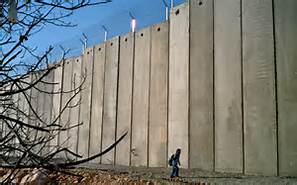 be impervious to any agency, method or technology. Impenetrable, resisting any level of energy or density of matter, this wall would serve the wildest fantasies of even the most certifiable of megalomaniacs. But it’s out of reach in our material world. The only place such walls can be forged are in the furnaces of the dogmatic mind. Is there anything in this universe more adamantine than the certitude of the religious bigot or political ideologue?

prayers on scraps of paper stuffed into cracks is one that fulfils a deep human need to connect in a tangible way with sacred places. In the city of Leiden, the Netherlands, there is a modern version of the wailing wall, it seems to me. Two artists, Ben Walenkamp and Jan-Willem Bruins, with the assistance of various civic and philanthropic bodies arranged that on various walls throughout the city you will be able read 101 poems by a range of poets, starting in 1992 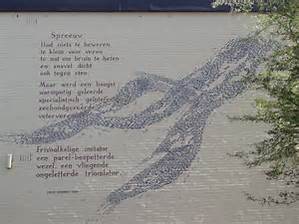 with a poem in Russian by Marina Tssvetaeva, concluding in 2005 with the Federico Garcia Lorca poem, De Profundis,

Assassinated, himself, in shadowy circumstances in 1936, his friend Pablo Neruda, explained that the poet had a premonition of his impending death, relating to him that, waking just before dawn Lorca walked to the ruins of a feudal estate on the outskirts of a village in Castile,

Suddenly Federico felt oppressed as if by something about to come out of the dawn, something

about to happen. He sat down on the broken-off capital of a pillar lying toppled there. A tiny lamb came out to browse in the weeds among the ruins, appearing like an angel of mist, out of nowhere, to turn solitude into something human, dropping like a gentle petal on the solitude of the place. The poet no longer felt alone. Suddenly a herd of swine also came into the area. There were four or five dark animals, half-wild pigs with a savage hunger and hoofs like rocks. Then Federico witnessed a blood-curdling scene: the swine fell on the lamb and, to the great horror of the poet, tore it to pieces and devoured it.

So, was this sublime poet, musician and playwright, taken to some pock-marked wall and slaughtered; his body later disposed of in a manner shrouded, to this day, in mystery? Yet another young life cut short. I used to yearn, like the Roman wall soldier in Auden’s poem for the days, When I’m a veteran with only one eye/I shall do nothing but look at the sky. I think, I’ve reached that point.

And I recall the words of Moe Bandy’s fine country song, ‘Til I’m Too Old To Die Young, I will climb the highest hill/And watch the rising sun/And pray that I won’t feel the chill/’Til I’m too old to die young. Why is that too much to ask for far too many?