Entry 94: Central Story– Tomorrow is St Patrick’s Day and I have not had a single drink for

three days now in preparation for the feast. For the first time since it was inaugurated in Sydney, the St Paddy’s Day parade will not be held. The reason? Money. The organisers discovered the debt too late to do much more than pass round the begging bowl in the hopes that next year it will be reinstated.

One would have thought the fact that this year is the Centenary of the Easter Rising in Dublin, a not inconsequential event in Irish history, might have concentrated the minds of the committee. Ah, well. So Irish.  And so much for thinking ahead.

When I returned from North Queensland to Sydney in 1995, I helped form a group we called Banter, and we landed the gig playing Irish jigs, reels, hornpipes and ballads on a float through the city centre. We repeated the gig in 1999 and then we called it a day. But what a day. The song celebrates the anarchy and the craic

of the gathering in the park near Central station in the mid-to-late 90s. In the years since, the celebration moved to another, enclosed, location and it has gone up-market with the tight security and ballooning expenses that goes with such a move.

Radix malorum est cupiditas, hisses the Pardoner to the congregation in Chaucer’s great tale: the

love of money is the root of all evil. When we started, we were a knock-about group playing in small rooms in the back of pubs and clubs. Then we got ideas. What about getting better equipment? Mics, a PA, stands, cables? But to pay for these? Charge the venues. And slowly and inexorably things changed. A mate who was OK in the more relaxed atmosphere of an informal session, found he could not fit in to the more disciplined requirements of the new regime. So, he left.

Those paying the piper felt, increasingly, they could call the tune. Can you play for

dancing? Not really, having neither a bass nor a drum-kit. But if you can stomp a hornpipe or reel or double jig- go for your life! Now, seeing how musicians, however accomplished, have become merely part of the backdrop, a blood-and-guts juke-box over which the audience discuss loudly the minutiae of their lives or consult constantly their digital devices lest they miss out on the latest ephemeral tit-bit chiming through the ether, I am glad that I don’t have to endure the ignominy that is par for the course. 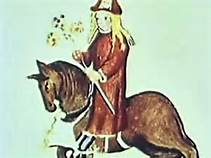 Some don’t seem to mind; a duo playing along to backing tracks with vocal enhancers makes more economic sense than having to divvy up the meagre spoils among five or six. Still, radix malorum est cupiditas. Chaucer’s tale of three young drunken revellers who set out to murder Death, who had claimed one of their friends that very day, is a masterpiece of storytelling.

Encountering an old man, they are directed, to fynde Deeth, turne up this croked wey,/ For in that grove I lafte hym, by my fey,/ Under a tree, and there he wole abyde;/ …Se ye that ook? Right ther

ye shal hym fynde. And under the oak tree, instead of their quarry, they find bags of gold. They draw straws to determine who should go back to the tavern to get wine to celebrate their great fortune. The youngest draws the short straw and sets off.

His fellows determine to kill him and split his share between them. However, the youngest has a similar mind and soul and so poisons their bottles of wine. He is killed upon returning and his murderers drink the poisoned wine. The drunken revellers are, indeed, successful in their search for Death. So, I am not going to the city to the parade this weekend, but am travelling up the Blue Mountains to Katoomba for the 21st music festival held there.

I was there for the inaugural event in 1995 and returned for quite a few years but have not been there for at least a decade. On a whim, upon learning that there was no parade, I decided to book my wife and myself into accommodation there. I reckon that I must have got just about the last room going in Katoomba and I reckon that I paid about five times the normal tariff. Silly me. Radix malorum est cupiditas is alive and well.

The immutable law of supply and demand sounds so much more acceptable, though, doesn’t it? Kurt Vonnegut puts it this way, thus the American dream turned belly up, turned green, bobbed to the scummy surface of cupidity unlimited, filled with gas, went bang in the noonday sun.” But it would be wrong to leave the rotten stench of cupidity as the end of

this account; instead, let Goethe have the last word, One ought, every day at least, to hear a little song, read a good poem, see a fine picture, and, if it were possible, to speak a few reasonable words.

So, I intend to hear a little song or two and take with me a book of poetry as well.