Entry 96: The Muso Laments– Isn’t it delicious when you think you have something no one else has? When all the flowers blossom all at once just because you are passing by? Then,

you must have been a budding guitarist along with me as I took up the challenge of negotiating the pathways of the guitar. Walter de La Mare knew the feeling, When music sounds, gone is the earth I know,/ And all her lovely things even lovelier grow.

You must have been with me in Belfast as I walked up the Falls Road to St Joseph’s College of Education. But others were walking up that road too. On one side of me was a handsome, movie-star clone who boasted that he had had his way with many lonely housewives in his district. He tried, at one stage, to seduce my girlfriend, who found him rather oleaginous.

Walking on my other side was a charismatic musician who had

a position with the Catholic establishment of the diocese. He raped me, or did his best to, one night when I was more than just a wee bit in my cups. The shadow at my left-hand told me that it was OK to lie to achieve whatever you wanted as long as you didn’t get caught in the arms of someone’s wife. The shadow at my right-hand told me that anything was OK as long as you didn’t get caught and you were secure in the arms of mother church.

Nearly fifty years later, I watched a skilful young tenor banjo player rip up the scene as he 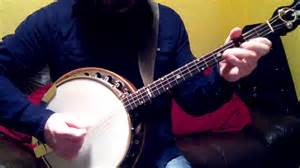 surveyed the drunken crowd at the Penrith Gaels on Paddy’s Day, 2016. I identified with him as he played to a largely oblivious audience. And this is why it is good to go to music festivals. The day after, we spent three days in Katoomba wandering from venue to venue within the festival site and heard some of the best music going on this planet. Some of it was courtesy of artists with an international reputation but, if you are lucky, a new unknown emerges to gasps of delight as the audience members recognise that a new star has ignited and was starting to shine in the musical firmament.

Three days and nights of this served to recharge seriously depleted emotional and spiritual batteries and, as we drove down the mountains to the Cumberland plain, we resolved to repeat the experience next year. Musicians from Ireland were prominent among the artists and I remembered that at one time I had ambitions that would have set me on the same festival-strewn path but for one small problem: I d

idn’t really have the requisite chops.

I twigged within a couple of years that, while I could make what passed for music, I was not in the same league as so many talented musos I encountered among the bars and byways of Belfast, not to mention the wider world. But this hasn’t stopped me practising the art in a small way, nor has it diminished the truth of what de la Mare wrote in his

poem, Music, When music sounds, all that I was I am/ Ere to this haunt of brooding dust I came. Brooding dust- don’t you love poets for their verbal felicity!

The beauty borne on vibrating air, whether set in motion by words or music, often bears no relation to the shape and physiognomy of the progenitors of the vibrations. Roger Bourland, professor of music at UCLA, nominated Rossini as the composer whacked most often by the ugly stick. Witter Brynner, minor American poet, would probably have awarded Amy Lowell the gold medal for ugliness when he referred to her as a hippopoetess, much to the delight of Ezra Pound, who repeated the unflattering epithet.

Journalist Heywood Broun Jr, who is remembered for his passion for battling social ills and for taking the part of the underdog, defended Amy Lowell in his obituary notice for her, Given one more gram of emotion, Amy Lowell would have burst into flame and been consumed to cinders. Very handsomely done, sir!  You get a sense of this in a poem of hers entitled, Music, where the persona lies in bed at night and listens to a flute being played by her neighbour.

The notes invade her bedroom and press in upon her at night, but by day she observes how he eats bread and onions with one hand while he copies music with the other. She is somewhat conflicted by the dichotomy between the unseen vibrations and the seen surface: as she notes,

He is fat and has a bald head,/So I do not look at him,/But run quickly past his window./There is

always the sky to look at,/Or the water in the well!/But when night comes and he plays his flute,/I think of him as a young man,/With gold seals hanging from his watch,/And a blue coat with silver buttons./As I lie in my bed/The flute-notes push against my ears and lips,/And I go to sleep, dreaming.

The Muso’s Lament was one of the first songs I wrote in college and it recalls the frustration I felt at the disconnect between what was yearned for and what was actually manifest.