Entry 70: The Dispossessed– I passed Poisoned Waterhole Creek on the way to perform at the

Boree Creek pub in the Riverina of NSW in the mid-seventies. When I asked about the name, one man told me that squatters in the 19th Century had poisoned the creek to get rid of the local aboriginal tribe. Another vehemently disagreed and said it was a furphy.

The Narrandera Argus and Riverina Advertiser of 5 February 1951 published an article by local man George Gow who wrote,

poisoned by the early settlers at what is known as the Poisoned Waterholes, on the Wagga road, a few miles from Narrandera. I have been in the Narrandera district for some 57 years and. know some of the early settlers of about 100 years ago, none of whom gave credence to such statements.

However, of late years the story has grown in intensity and if not contradicted will go down in history as a hideous fact… Some 57 years ago I frequently saw an ancient black from Narrandera known as Mickey. He used to interest me with tales of his youth and of the blacks when he was a boy. He never mentioned any poisoning of his tribe to me, nor did I ask him, as I had not heard of such tales myself at that particular time…

So called ‘mulga’ historians, who have no connection with the very early days, spin the most blood-

curdling tales and add to them as they go along to make them more interesting. Perhaps the person most responsible for the wild tales of alleged atrocities against the blacks is a lady, Dame Mary Gilmore…

In a recent article in a Sydney journal Dame Mary Gilmore recalls the wholesale massacre of Riverina blacks by driving them into the river and drowning them! Just fancy trying to drown a river black by driving him into the water…

she writes, ‘Shooting children was considered a waste of ammunition. They were just as effectively killed by a quick blow on the head with a stirrup iron.” If such stories spread, our early ancestors might not be very popular. It would be bad enough, even if they were true. I appeal to the people of Narrandera and the Yanko Shire generally to help refute those tales. 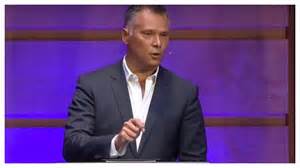 In October, 2015, Stan Grant, proud Wiradjuri man, winner of the prestigious 2015 Walkley award for coverage of Aboriginal Australia and the Indigenous affairs editor for The Guardian, Australia, wrote,

It is here that I stand now, on the edge of the Murrumbidgee near Narrandera. After several days I have shaken loose the noise of the city. Now I hear birdsong and the flapping of the wings of ducks

as they skim the surface. In the distance I can hear the barking of a dog and there is a breeze pushing softly through the long grass.

Now I know I am home. I have my youngest son with me. He has come here throughout his life and we have passed this same road to his grandparents’ house time and again, but he has never paused to question the curious name of this place: Poisoned Waterhole creek. My father would point it out to me when I was the age my son is now. And so I point it out to him. 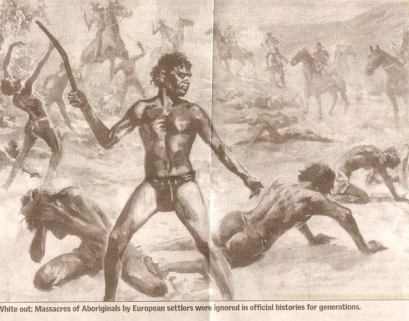 The Wiradjuri rested here and drank from the stream. As the conflict continued the local homestead owner grew tired of the black people on his property, so he poisoned their waterhole. Many drank from it and died agonising deaths. “Really, Dad?” My son asks. “Here in Narrandera?…” I tell him that later other Wiradjuri people sought refuge from a white raiding party.

They huddled together on an island in the middle of the river but the white men opened fire, killing all but one boy. Today this place is known as Murdering Island. Islands and creeks with such sinister names. Yet today we can be so oblivious. They are almost casual references to long-forgotten atrocities of our past.

I am unable to arbitrate the matter, but believe that oral history accounts of atrocities

associated with dispossession from the land of my birth are more generally accurate than not and that the harassment and persecution of travelling people continue to this day. The song deals with three groups, the Aboriginal people of Australia, the various travelling people of Europe and the Irish people.

I leave you with this verse extract by George Gow’s nemesis, Dame Mary Gilmore, entitled The Waradgery Tribe,