Entry 72: No Surrender- In January 1995, we returned to Sydney from North Queensland. Yet 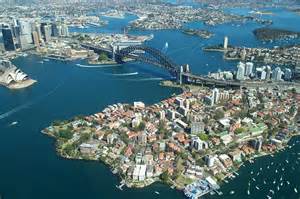 another move. In the previous six years we had moved from Sydney (a long train journey) and lived at four different addresses. This has been the pattern for the whole of our married life, having lived at three addresses in the first two years of marriage in Northern Ireland followed by a move to Sydney (a long, long, plane journey).

The migrant hostel at Orana at Dulwich Hill was followed by a grim B&B in Wollongong, followed by a flat at Mt St Thomas, then a teachers’ housing property over near the University at Gwynneville. Back to Ireland in 1979 and three more addresses, then back to Australia in 1988 and another couple of abodes- one being a caravan in a back-yard. An average of a move every eighteen months.

In my mid-forties, drinking beer in Sydney’s outer west in a backyard that was not my own, I contemplated the commute that I would have to make to get to work at St Paul’s College, Manly, which has a glorious position on the hill overlooking the harbour. However, to get there would entail a bus, train and ferry journey each way as well as the trudge along the Esplanade and up and down the hill from Manly Wharf to get to work. The commute, I realised, would be longer than the teaching day!

I wrote this song in February 1995, not as the sectarian war-cry of my birthplace, but as

something akin to whistling in the dark. And in that first winter back in Sydney, it was dark getting up for work and dark coming home. Home, because we bought our first Aussie home in March ’95 and still live in it.

Twenty years in one spot and counting. Whoo Hoo! The horrendous commute lasted for just over two years and then I was offered a job at a Girls College less than half an hour down the Great Western Highway- happy days! But at that time, in January ’95, when it seemed that was just more of the same old same old, we needed something to assuage the mid-life blues. Best I could come up with was this song, the chorus of which references a Ron Cobb cartoon depicting an old man in a rocking chair set out on the nature strip with the trash for collection- a withered Christmas tree by his side.

In my own private pantheon, or it may just be Elysium, it will come as no surprise that it is

populated with poets, composers, painters, dramatists, novelists, sculptors, and ordinary people. I include cartoonists in this exalted company- they have lightened- and, indeed, enlightened- my existence from the time when I was a kid reading MAD magazine in Aruba to today as I laugh over the jolly japes of First Dog on the Moon.

Australia is well served by its cartoonists; Bill Leak, Michael Leunig, Paula Wilcox and Bruce Petty are a few of the cartoonists I have enjoyed with my muesli over the years.  But I want to focus on Ron Cobb here; he’d be in his seventies or eighties now and a survivor from the counter-culture of America in the 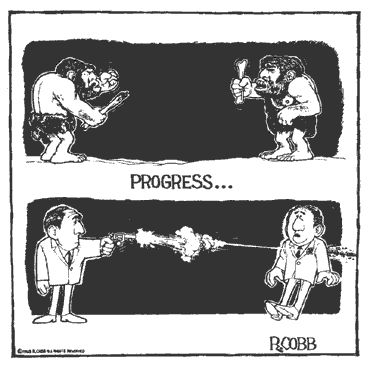 ‘sixties (although, it seems a tautology to use counter-culture and cartoonist in the same sentence). A cartoon of his that I have carried in my head and reproduced on blackboards and whiteboards in Australia and Ireland since the seventies is one called Progress.

The upper panel shows two cavemen brandishing bones at one another. Then, dividing the upper panel from the lower, is the word Progress. The lower panel shows two men in suits, one has a pistol with which he has just shot his rival dead. Point made. Another cartoon which has stayed with me is one that exemplifies MAD- but not the magazine; rather the acronym Mutual Assured Destruction. Cobb, like so many of us- I refer you here to Dylan and A Hard Rain– was preoccupied with the thought that the Dr Strangeloves of the world would miscalculate badly and reduce us all to glowing nuclear ash.

His cartoon has two men cowering under a broken concrete shelter surrounded by rubble and skulls. One man says to the other, There’s a rumour goin’ round that we won. And this brings us to hell. My version of Tartarus is full of my enemies; those who threw rocks at me as a kid, or sold me dud cars, as well as the usual complement of fraudsters, predators, murderers and others of the ilk.

But, let’s back up! I refuse to end a journal entry with such blackness. Instead, like they do on the news, here’s something lighter to bring the damn thing to a close: John O’Brien wrote about the Irish in western NSW, especially around Boree Creek, a few generations before I visited the place. Listen to an old woman’s simple faith in the face of adversity,

When things were at their worst./Her “Great, Big God” would justify/The trembling trust of men;/For, when the cheerless night passed by,/The sun would wink his golden eye,/And birds would sing again.