Entry 80: Any Old Song/Dancing House– I’ll let the following adaptation from an article by 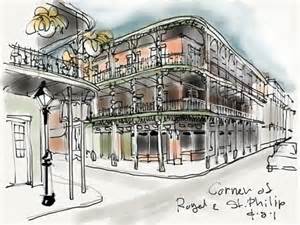 one of my correspondents speak for itself:

Records show that The Dancing House was established on the banks of the Mississippi in the French Quarter of New Orleans in 1816 by an Irish associate of the pirate Jean Lafitte. His name is lost in the mists of time but one source of dubious provenance names him as Ian Chell, an adventurer who fled Ireland after the failed rising of 1798.

The same source indicates that he fought in the

Battle of New Orleans and, as a reward for services rendered, was given a goodly sum of money with which he established a New World version of the old Irish ‘shebeen”.

The structure overlooked the river and its original name was written in green paint and in Gaelic. It had a notorious reputation and was shut down on several occasions. It passed through several hands in the century that it was in existence. Its use has been variously described as a brothel, a dance venue, a haunt for smugglers and bootleggers, a safe 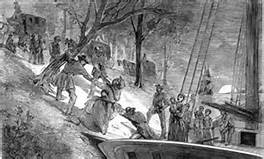 house for the underground railway during the slave years, and a social club for immigrants from various parts of Europe.

Pre-eminent among its accomplishments was the quality of the music, which is a continuous motif in all its history and incarnations. The end of the fabled Dancing House came in the late summer of 1916. At this time, it was owned by a rogue of the first water; one “Colonel” James Ponsonby, a veteran of the Boer War who won it in a crooked poker game from its syphilitic previous owner.

A fracas erupted between Ponsonby (with his henchmen) and a group of Irish navvies- who were fired up by the events of Easter 1916 in Dublin and its aftermath. A blaze broke out and the structure burned to the ground. The glare of the inferno was seen for miles that fateful night. There is a curious epilogue to this incident that has kept the legend green (in more than one sense).

The facade overlooking the Mississippi detached from the rest of the building and fell into the river where it floated downstream. Clinging to the wreckage was an Irish navvy called, Charlie Brymit, a native of the Antrim glens. How he got the facade to land, or where, is a matter for conjecture. What is important is that he did: for the facade preserved the original name in faded green paint (and all its other names in English and other languages.)

last owner. Ponsonby had renamed it The Britannia Arms in a vindictive attempt to expunge its origins. Loosie May, a young Southern lass, the spirited heiress of one of the large landowners of the Lake Ponchchantrain area takes up the story in a diary entry dated September 23, 1916: “A most curious sight- a waggon drawn by four mules pulled in in front of the coach-house today. A bedraggled Irishman, half delirious was with a carter I know of vaguely. He asked for assistance to unload what looked to be a large pile of waterlogged planks. I gave orders to have it done. He begged for payment in advance saying he had promised the men ten dollars. I cannot fathom why, but I did! More on this curious transaction tomorrow.” Alas, we cannot know more, for the diary pages from this date on are missing.

The following notes from the diary of an anonymous folklorist may shed further light on the matter “Shrevesport 2/2/22. Home of Handly Moore. Negro music- guitar very primitive.

Stories of share-cropping. Love. Nothing new. Odd anecdote about a ritual burning. Mad Irishman of Moore’s acquaintance. Owner of illicit house with drink. Bizarre opening ceremony. Nailed up a plank written in a foreign language at front entrance. Gathered friends (Moore among them) outside at midnight. Another plank placed in oil-drum. Burned to ashes which are buried at crossroads!” Every business, vocation, occupation- what you will- has its myths.

One of the most elusive yet persistent among establishments which are more than mere drinking dens, concerns the original signage of The Dancing House. In locations as scattered as Valparaiso, Rotterdam, Chicago, Durban, Skopje, Kalgoorlie and Belfast I have come across stories about The Dancing House. It is a modern version of splinters from the One True Cross! The owners swear that they have one of the sections of the original facade. They confide that the “real” artefact is concealed behind the visible name- embedded in the fabric of the building, for instance.

In no case have I been favoured with a glimpse of the “relic”. Although, in several cases, the name 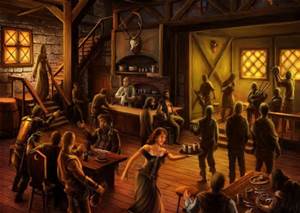 has been emblazoned in cheap glitter or garish neon or a pathetic attempt at a “weathered” sign- obvious fakes! The ambience of such places is such that no one could seriously imagine that they are true offspring of the original. Still, I have been in a few establishments where it would be churlish to believe otherwise than what has been claimed. Maybe you’ve been there too. Such places are welcoming, tolerant, musical and magical.

And I may have been in one or two myself, over the years, the decades!