Entry 89: Woman in Blue– What is it with uniforms? Women are said to be partial… What red-blooded boy had not dreamt of being a dashing Hussar

, resplendent in shining breastplate, astride a warhorse decked out in regimental colours charging the enemy line? The empires of Europe with their Dragoons, Lancers and Hussars provided ample material for dreams of glory as young men yearned for their place in the Imperial sun.

Tennyson has immortalised those Dragoons, Lancers and Hussars that made up the Light Brigade as they charged the Russian cannon at the Battle of Balaclava during the Crimean War on October 25, 1854. In a wax cylinder recording of 1890, you can hear trumpeter Martin Landfried, who saw action in the battle as part of the 17th Lancers, play the charge on the bugle used on the day (and which, incidentally, had also been sounded at the Battle of Waterloo in 1815).

The recording was made, not for commercial release, but to aid the Light Brigade Relief

Fund as, by this time, many of the heroes had fallen on hard times. Not an unusual story. Shakespeare created these sorts of characters in the persons of Nym, Pistol and Bardolf who were friends of Henry V in his youth.

Let’s listen to their noble friend rally the troops before Agincourt,

He that outlives this day, and comes safe home,/Will stand a tip-toe when this day is nam’d,/And rouse him at the name of Crispian./He that shall live this day, and see old age,/Will yearly on the vigil feast his neighbours,/And say “To-morrow is Saint Crispian.”/Then will he strip his sleeve and show his scars,/And say “These wounds I had on Crispin’s day.”/Old men forget; yet all shall be forgot,/But he’ll remember, with advantages,/What feats he did that day. Then shall our names,/Familiar in his 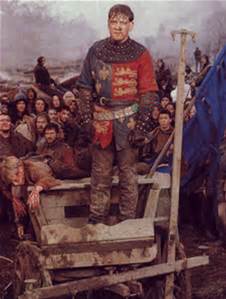 mouth as household words—/Harry the King, Bedford and Exeter,/Warwick and Talbot, Salisbury and Gloucester—/Be in their flowing cups freshly rememb’red./This story shall the good man teach his son;/And Crispin Crispian shall ne’er go by,/From this day to the ending of the world,/But we in it shall be remembered-/We few, we happy few, we band of brothers;/For he to-day that sheds his blood with me/Shall be my brother; be he ne’er so vile,/This day shall gentle his condition;/And gentlemen in England now a-bed/Shall think themselves accurs’d they were not here,/And hold their manhoods cheap whiles any speaks/That fought with us upon Saint Crispin’s day.

But they got scant reward for their service in his war- indeed, Bardolph is hanged on Henry’s order for stealing from a church, Nym also reported as executed for looting and Pistol vows to desert and return to England as a thief and pimp.

referred to Queen Victoria as the widow of Windsor as a reference to all the men killed in her service. Nevertheless, his depiction of Tommy Atkins as the quintessential British squaddie who is despised in peace time but feted when the war drums begin to beat, steers a course between the romantic square-jawed young grenadier of propaganda posters and the syphilitic scoundrel who enlists to escape imprisonment or worse,

And the band, indeed, plays different tunes for different dancers. Lord Cardigan, who led the charge of the Light Brigade in 1854, survived. He didn’t take time out, though, to succour the wounded heroes of the charge nor did he seek to rally and affirm those who had, somehow, survived unscathed.

No, this is what he did: he left the field of battle, boarded his yacht- which was moored in Balaclava harbour- and had a champagne dinner. No doubt, he changed into full-dress regimental uniform as he entertained a select few amidst the clinking crystal-ware and silver service.

kick-ass detectives. I remember speculating how it would be to be the significant other of a patrol-woman of action. The uniform here adorns the female rather than the male. In the decades since lots of women, on screen and off, have taken up the burden of protecting society from the ne’er do wells who lurk in the shadows.