Entry 74: Another Mother’s Day– Know any saints? Perhaps you’re related to one or yearn for

that crown yourself. Me? Not one or likely to be one but I can claim kinship to one- if I am to believe my aunt Maggie who was a missionary nun in Africa and who later became the mother superior of a convent in Ireland.

She wrote to me in the late 80s, when I had returned to Australia and she had retired from active life to a convent at Rostrevor, Northern Ireland, that she was pretty sure that we were connected to the founder of the Brown Joeys, more formally known as the sisters of

St Joseph of the Sacred Heart- one Mary MacKillop. She thought that I might be interested in the connection.

At the time, I thought little of it but my interest in the matter has revived sporadically over the years since: in 1995 with Mary MacKillop’s beatification by Pope John Paul II and in 2010 with her subsequent canonisation by Pope Benedict XVI. If I cared more for genealogy I might now be able to confirm the supposed connection, but I am happy enough with just the possibility of falling within the penumbra of a saint (if one should use such a lightless metaphor in reference to nuns).

Sometimes, lightless is right, though- the Magdalene laundries have a spotted reputation.

These institutions were run by various orders of nuns, among others, where young women: those pregnant, those dispossessed and those distressed, were put to work in harsh conditions where love was often hidden behind the billowing vapour, clanking rollers and shouted orders in places as far afield as Australia, America, Britain and Ireland.

It’s only in the past 10 years or so that the last one closed. The truth of what happened in 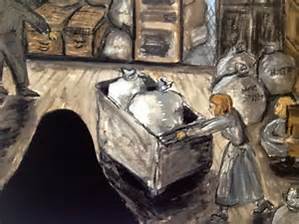 these places is probably as complex and as various as the times, the places and the people involved: but not likely to be, as the most vociferous critics aver, comparable to a Nazi concentration camp, nor were they merely a soothing refuge for unfortunate girls and women as the defenders of the laundries would have it.

Our family experience of nuns has been generally positive: my wife, though remembering with ire rulers across the hand as a child because she had mispronounced an Irish word, nevertheless waited for nearly a year until Sister

Margaret of the Good Samaritans was able to baptise our younger daughter rather than allow the time-serving priests of the parish we were living in at the time to perform the rite.

I still laugh at an anecdote about my aunt, with bottles of illicit poteen she was bringing back for the nuns in her convent in Cork secreted in the voluminous folds of her religious garments making a

clinking, clacking racket as she ran for her train through the Dublin station attracting the stares of bemused onlookers.

In 1971, as a wedding gift, she gave us a set of paintings by Nigerian artists which has adorned the walls of our residences for 45 years now. Nuns, generally, are more connected to the communities they serve than their male counter-parts, they have a better sense of humour and, if the church is to survive in the 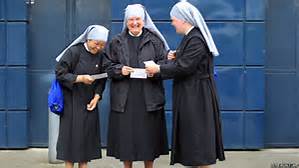 long run it will be down to these redoubtable women rather than the popes, cardinals, bishops and priests who cling desperately to their outmoded privileges.

And so to the nun that this entry’s song is all about- Mother Teresa. She has been the subject of hagiography and vilification as one might expect concerning one of the true icons of this age. The song looks at one part of her interior life- the dark night of the soul. David Van Biena in an article for “Time” magazine (August 23, 2007) wrote in fascinating detail about the contradictions at the heart of her life and ministry revealed through her letters to her confessors, 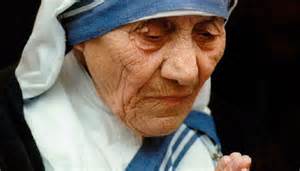 …many of them preserved against her wishes (she had requested that they be destroyed but was overruled by her church). They reveal that for the last nearly half-century of her life she felt no presence of God whatsoever.

This woman could have provided a template for characters in existentialist angst-ridden dramas from Ibsen to Beckett where all that can be seen is “an arid landscape from which the deity has disappeared.”

She wrote in 1962, If I ever become a Saint–I will surely be one of ‘darkness.’ I will continually be absent from Heaven–to be the light of those in darkness on earth.

journal, and may have recourse to in future: Henry Wadsworth Longfellow in stanzas two and three of his poem Loss and Gain wrote with clarity and wisdom,

I am aware/How many days have been idly spent;/How like an arrow the good intent/Has fallen short or been turned aside.//But who shall dare/To measure loss and gain in this wise?/Defeat may be victory in disguise;/The lowest ebb is the turn of the tide.