Entry 45: The Ballroom of Romance- Was it a dream or, perhaps, a nightmare? Was I there in 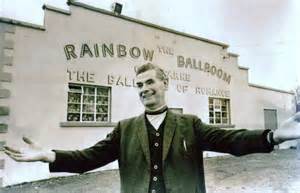 that rural dance-hall in Ireland in the late 1960s- a trio, with my brother and cousin? Maybe it was an atavistic, male, cautionary tale, but I can remember a shiver of premonitory trepidation as I approached the first girl in the line at the opposite end of the fluorescently-lit hall.

May I have this dance? I asked politely. Sorry, no.

The accent was a lilting brogue that brought welts up on my soul. I could feel the eyes: from across the hall, my brother and cousin smirking and a ruck of male unknowns- as well as the sidelong glances and micro-expressions of amusement from the girls who had heard the put-down, stretching, as it seemed to me, to the crack of doom.

Fancy a dance? I asked the next girl, feigning a couldn’t-care-less slouch. She didn’t even

answer but turned away and continued a conversation with her friend. I don’t have to go on, do I? In some sad corner of my imagination I am in that dance-hall to this very day, moving along a line of increasingly lovely girls who reject me in a variety of fiendishly humiliating ways.

As I recall, Larry Cunningham and the Mighty Avons were playing that night. Happily, this experience was not typical of my encounters in 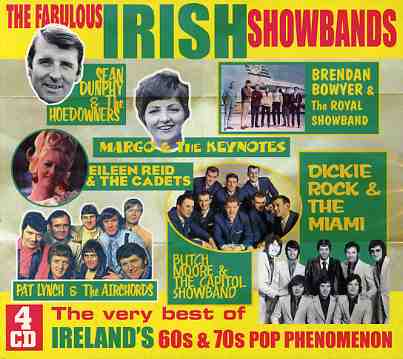 nightclubs and dance-halls during the latter half of the 1960s. Club Rado and the Jazz Club, Romano’s and the Astor in Belfast, the Marquee in Cushendall and Castlegreen on the road to Ballycastle were among the magical places where people could meet and mingle to music that was of a surprisingly high quality.

In the years and decades since those times, social interaction has moved increasingly online. The dance-halls, ballrooms and musical soirees of the past have not survived in any great number, I would guess.

Enniskillen and then a couple of days in a cabin on Lough MacNean bisected by the Irish border. This was in 1985. Having driven for some hours, feeling a bit tired from the trip, I sat out on a bench with my guitar and watched the water-birds among the reeds. A sequence of notes stuck in my head and I started to find the accompanying chords.

The original ballroom of romance was located across the Lough in the nearby village of Glenfarne: a famous location drawing crowds from the surrounding parishes for generations. I had viewed the short movie about this place a few years before. Starring Brenda Fricker, the evocation of the desperation faced by her 36-year-old character Bridie who has been putting on her best dress every Friday night for twenty years in order to attend the Ballroom of Romance has stayed with me for decades.

Based on a short story by Willian Trevor, it explores the themes of isolation, longing,

emigration and lost love. Set in the eponymous ballroom in 1950s rural Ireland, it is by turns, poignant, funny and excruciating as we follow Bridie from the farm she shares with her crippled father to the windswept dance venue. She hopes to form an alliance with the drummer in the trio which is providing the music for the dance. He is dependable, doesn’t drink and will be able to help her run the hardscrabble hill farm when her ailing father dies. 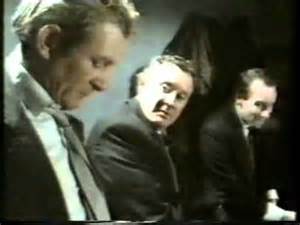 She realises, however, during the tea-break, that his landlady has her hooks into him and, so, she retires from that romantic field of battle. Her only other choice is one of another trio: three middle-aged boozy no-hopers who attend the dance every week after fuelling up at the nearby pub. Bowser Egan is the man- not of her dreams, for that person emigrated to England when she was still a young woman, nor is he the second choice, for the silver medal goes to the drummer in the band.

No, Bowser, is a poor and distant third as the end of the film demonstrates: following her

as she makes her way towards home on her bicycle, he renews his suit, promising to come and see her as soon as his mother has gone to meet her maker- a reformed man who will even make her a little flower garden. Then, a pause, and his main reason for being there, Will you come into the field, Bridie?

Afterwards, Bridie cycles home as Bowser, looking after her with a satisfied contempt, finishes off his whiskey and tosses the bottle into the field. I wonder how many men ask themselves, in relation to their partners, which of the trio they are: the golden paragon, the abstemious silver second, or the grubby bronze

Bowser leering into the darkness, who will never know the pleasures of poetry such as Conrad Aiken’s,

He saw her body’s slender grace,/This drooping shoulder, shadowed face;/All of her body, hidden so/In saffron satin’s flush and flow,/Its white and simple loveliness,/Came on his heart like giddiness,/ Seductive as this music came;/Until her body seemed like flame…