Entry 55: Back to You– The road and music are related and rooted deep in history. Minstrels,

troubadours, strolling players, and itinerant harpers such as the great Turloch O’Carolan who travelled the length and breadth of Ireland in the 17th Century, have set a template for musicians with itchy feet ever since.

We know for a fact, of course, that Robert Johnston made a pact with the devil at the crossroads and that the late, great Hank Williams perished in the back of the car taking him to a New Year’s Day concert because his last single was prophetically entitled, I’ll Never Get Out of This World Alive.

Now, whether the original musical impulse was connected to the sacred or the profane will never be known, although I would speculate that they were twin births for no more reliable reason than that offered for the crossroads pact and prophetic song title. The brothers Grimm in the 19th Century recorded a tale about and ass, a dog, a cat and a cock, each having served faithfully their masters and mistresses, and now, at the end of their usefulness, about to be slaughtered, take to the road and form a pact to travel to the city where they may try their luck as a band of musicians.

On their journey, they come across a dwelling in which a band of criminals are sitting down to a feast. They hit upon a plan to eat well that night so the donkey stands on his hind legs, the dog climbs up with the cat on his head and the cock at the top of the pile: they are now a real band!

When all was ready a signal was given, and they began their music. The ass brayed, the dog barked,

the cat mewed, and the cock screamed; and then they all broke through the window at once, and came tumbling into the room, amongst the broken glass, with a most hideous clatter! The robbers, who had been not a little frightened by the opening concert, had now no doubt that some frightful hobgoblin had broken in upon them, and scampered away as fast as they could.

But the real world is not as aesthetically pleasing, alas. On Friday the 13th of November 2015, a band of evil men broke into the Le 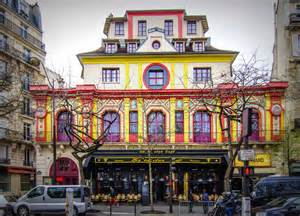 Bataclan theatre on the Rue Voltaire. In an article in The Guardian shortly after the massacre we read that, the chinoiserie-style theatre was built in 1864 and opened the following year. It has played an integral part in Paris’s musical scene…in the early 70s. Lou Reed, John Cale and Nico performed there in 1972…Prince, Jeff Buckley, Captain Beefheart, Iron Maiden, Judas Priest, Motörhead, the Clash, the Cure, the Ramones, Beck, My Bloody Valentine, Blur and Oasis are just some of countless artists who’ve played at the Bataclan over the years.

In a city synonymous with light; in a street named after the great secular philosopher

Voltaire; in a venue that is emblematic of the plurality and vibrancy of Western culture- there can be no doubt that this place was not picked at random, but quite deliberately by those whose souls are diametrically opposed to the spirit and energy of the culture of Western civilisation. I had not heard of the band that played there on the night terror struck.

The band, The Eagles of Death Metal, released this statement on their Facebook page which reads, in part …we are horrified and still trying to come to terms with what happened in France. Our thoughts and hearts are first and foremost… with all the friends and fans whose lives were taken in Paris, as well as their friends, families, and loved ones. Although bonded in grief with the victims, the fans, the families, the citizens of Paris, and all those affected by terrorism, we are proud to stand together, with our new family, now united by a common goal of love and compassion. We would like to thank…all those at ground zero with us who helped each other as best they could during this unimaginable ordeal, proving once again that love overshadows evil.

The heartless ghouls behind the killings should read the posts on the band’s page to see just how futile their campaign was, is and will be. A previous attack in Paris on Charlie Hebdo inspired a great cartoon by Australian David Pope- He drew first. I know cartoonists will hit back against this atrocity. I leave you with this Sandburg poem entitled Honky Tonk in Cleveland, Ohio,

But, when they finish weeping, they will pick up their pens and they will be mightier.