Entry 31: The Cycle of Love- Gulgong is a memorable spot. Situated in

the Central Tablelands of New South Wales about 300 kilometres north-west of Sydney, it afforded the indigenous Wiradjuri people plentiful game and sweet water before white settlement. In the 1820s, conflict between white settlers and the aboriginal inhabitants intensified, with martial law being decreed in 1824. Shooting parties, freed to roam at will, killing the tribespeople on sight, ensured that, within a generation, very few survivors remained. One William Cox, who, according to some

sources made a significant contribution to their extermination, claimed the last local black died in 1876.

By this time, a gold rush had been in full swing for six years, with the population of the area swelling to over 20,000. But by 1881, it was all over, with the population subsiding to a little over twelve hundred souls. In its hey-day, though, Gulgong swanked it with the best of her 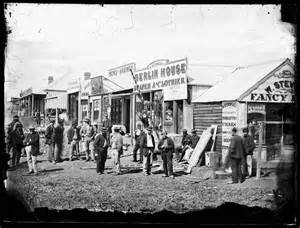 larger metropolitan sisters what, with dancing girls having nuggets of gold thrown in their laps and crowds of rowdy fortune seekers surging through the narrow streets.

Henry Lawson sets the tone in The Roaring Days, So let us fill our glasses/ And toast the Days of Gold;/ When finds of wondrous treasure/ Set all the South ablaze. Between 1870 and 1880, the fabled Cobb and Co coaches took away 483,170

ounces of gold from Gulgong and nearby fields.  And the poet captures the excitement of the time with Behind six foaming horses,/And lit by flashing lamps,/Old Cobb and Co., in royal state,/Went dashing past the camps.

Henry would have been somewhat bemused to find himself on the first ten-dollar note, given his lack of

luck with money during his lifetime. Almost always desperately poor, he spent time in Darlinghurst Gaol for drunkenness and non-payment of child support. The tone of One Hundred and Three, his prison number, and the title of a sombre poem, published in 1908, is far removed from The Roaring Days, The brute is a brute and a kind man kind and the strong heart does not fail-/A crawler’s a crawler everywhere but a man is a man in gaol!

But I like to think that he would have laughed out loud to find that Francis Greenaway, a convict transported for the crime of forgery, is depicted on the obverse of the note. In 1989 a white VG Valiant drove slowly up to the Ten Dollar Motel as the sun was rising on New Year’s Eve. The back of the 2000 k

m  journey between North Queensland and Sydney was broken and that’s how my spine felt as we settled into our rooms.

My wife and daughter were excited by the buzz in the streets, surging again with people, as revellers got set for a night’s dancing and drinking as singers in the town’s pubs revisited the region’s past in varying displays of competency at bush balladeering. The 19th Century streetscape is one of the attractions of the town and it was featured as a backdrop to Lawson’s image on the new decimal currency paper note. We had a fine old time dancing up and down the street as the bush band bashed out old favourites such as The Heel and Toe Polka and before we knew it, a new decade had ticked over.

Returning to Sydney at the end of 1994, we flew over the sunlit landscape below where a little over four years previously I had managed to take a wrong turn during the night drive down from Queensland and found the redoubtable Valiant bouncing down a dry creek-bed where the big, lazy, Detroit six cylinder, displacing 245 cubic inches, shrugged off the sucking sand and rounded river stones to shoulder past whipping branches as the headlights made crazy patterns in the

darkness while my passengers made comments on my sanity and prowess as a driver. When, somehow, I regained a passable dirt road without ripping out the sump, I told my captive audience that I had merely taken a scenic detour to enliven their journey.

I have been back to Gulgong to two more occasions since then, in ’96 and ’97 to take in the Folk Festival at the turn of the year. I would have liked to have played a few sessions in the pubs with the group I helped get started in Sydney, but family circumstances and work commitments made it impossible. However, carting my second-best guitar, I strolled into a pub and, waiting my opportunity, I sang a song I had composed earlier in the year to a small crowd who had done nothing at all to provoke me.

The stimulus for composition was reports in the media about abuse of various kinds that got me thinking that there were more cycles that those of abuse. Standing in the pub that afternoon, what prompted me to unsling the instrument was the sight of an elderly, smiling woman who reminded me of my mother, who had died five years previously.

As I say, Gulgong is a memorable spot.