Entry 43: Pandora’s Box- Blame Erasmus. Who, after all, can resist the urge to open the

box? If instead, you were faced with a large jar, one large enough to house a body you might instead just give up especially if it were inhabited by Diogenes the Cynic who often slept in one in the marketplace of Ancient Athens.

He was known for his philosophical exercises such as carrying a lamp in the daytime, claiming to be looking for an honest man. In his translation of the myth in the 16th Century, Erasmus renders the Greek word pithos which means a large jar- with pyxis which means a small box. From that time, reinforced by painters’ treatment of the myth, box it remains.

But I don’t want to leave the ancient Greeks just yet.

Zeus, somewhat miffed at Prometheus for gifting Man with fire, commanded Hephaestus to fashion Pandora out of clay. Let me say now that, when I referred to humanity as Man before, it wasn’t a PC lapse.

You see, this refers to the Golden Age, when the poet Hesiod explains how the end of man’s Golden Age, (an all-male society of immortals who were reverent to the gods, worked hard, and ate from abundant groves of fruit) was brought on by Prometheus, when he stole Fire from Mt. Olympus and gave it to mortal man, Zeus punished the technologically

advanced society by creating woman. Thus, Pandora was created as the first woman and given the jar which releases all evils upon man. The opening of the jar serves as the beginning of the Silver Age, in which man is now subject to death, and with the introduction of woman to birth as well, giving rise to the cycle of death and rebirth.

Of course the jar was opened! and this explains that bunion on your foot. The most puzzling part of the myth is what was left in the box. The Greeks have a word for it, elpis. This has been translated as Hope. So, if

hope is left in the box, what sort of hope is being referred to?  My head hurt after reading the many contending views so I’ll just cite the astringent argument of Nietzsche and leave it for you to sort out,

One single evil had not yet slipped out of the jar. As Zeus had wished, Pandora slammed the top down and it remained inside. So now man has the lucky jar in his house forever and thinks the world of the treasure. It is at his service; he reaches for it when

he fancies it. For he does not know that the jar which Pandora brought was the jar of evils, and he takes the remaining evil for the greatest worldly good—it is hope, for Zeus did not want man to throw his life away, no matter how much the other evils might torment him, but rather to go on letting himself be tormented anew. To that end, he gives man hope. In truth, it is the most evil of evils because it prolongs man’s torment.

Some mistakes you profit from- I refer here to the pithos to pyxis of Erasmus: how else could I draw the line so strongly between older TVs where the cathode ray tube nestles in a box-like housing, with the ills which stream from the contraption into the world of the 20th Century where I have lived the majority of my life? TV was also called the idiot box and blamed for all sorts of ills that poured from it- inciting teens to promiscuous sex and the like.

The metaphor doesn’t work in the 21st Century though: flat-screen TVs aren’t boxlike and, in any case, the exploding world of alternative devices and ways of receiving information and entertainment means that no longer do we crouch before the electronic sage in the corner, communally absorbing its emanations. But for a few generations, it was a way of life and Howard Nemerov, in a poem entitled A Way of Life, spoke for those now receding generations,

It’s been going on a long time./For instance, these two guys, not saying much, who slog/Through sun and sand, fleeing the scene of their crime,/Till one turns, without a sound, and smacks/His buddy flat with the flat of an axe./Which cuts down on the dialogue/Some, but is viewed rather as normal than sad/By me, as I wait for the next ad./It seems to me it’s been quite a while/Since the last vision of blonde loveliness/Vanished, her shampoo and shower and general style/Replaced by this lean young lunkhead/ parading along with a gun in his back to confess/How yestereve, being drunk/And in a state of existential despair,/He beat up his grandma and pawned her invalid chair./But here at last is a pale beauty/ Smoking a filter beside a mountain stream,/Brief interlude, before the conflict of love and duty/Gets moving again, as sheriff and posse expound,/Between jail and saloon, the American Dream/Where Justice, after considerable horsing around,/Turns out to be Mercy; when the villain is knocked off,/A kindly uncle offers syrup for my cough. (My thanks to Nemerov’s widow, Valerie, who gave me permission to use this poem, in its entirety.)

We sit, chained to the walls of our caves watching the dancing shadows projected from the 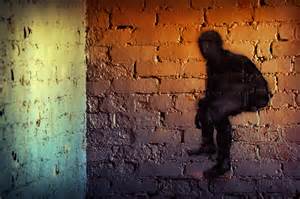