Entry 20: Straight and True- It’s tough being a hero. Not that I claim this honorific for myself, I hasten to add. I think of poor old Heracles, whose name means “the glory of Hera”. Heracles, according to Wikipedia, was the product of what is known as

heteroparental superfecundation- where a woman carries twins sired by two different fathers. Randy old Zeus, the husband of the fanatically jealous Hera, disguised himself as the husband, impregnating Alcmene with Heracles before the real husband, Amphitryon, returned later that night to sire Heracles’ mortal twin, Iphicles.

Hera made Heracles’ life miserable in spite of the name change from Alcides to placate her. She attempted to prevent his birth and, failing that, successfully connived to rob him of his high kingship. When he was only eight months of age she sent two giant serpents

into the nursery, which he duly strangled.  Astonished, Amphitryon sent for the seer, Tiresias, who prophesied an unusual future for the boy. What a surprise! Perhaps more surprising is that Heracles, when presented with a choice between a life of indolent hedonism or severe but glorious virtue, chose the latter.

Most of us would choose the former- or is that just me? His exploits live in legend and he remains the gold standard of the type. If demi-gods such as Heracles find the hero business so fraught, what hope for mere mortals? We need our heroes but are uncomfortable with templates from the past. The democratic spirit in western countries generally, but more

particularly in Australia, values the self-deprecating-aw-shucks-anyone-would’ve-done-what-I-did schtick adopted by those men and women who perform acts of heroism few of us could ever contemplate doing.

Every time I look at the Australian of the Year site with its categories-one even called “local hero”- I feel proud, on the one hand, that we have so many great role-models among us; but on the other hand (and there’s always that other hand, isn’t there?) I feel more than a bit inadequate that I can’t really measure up. Except to our kids- at least for a while. 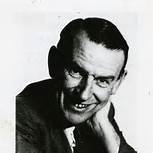 When I read South Australian poet Ian Mudie’s, My father began as a god the shock of recognition was immediate: I saw myself as the persona of the poem, first; that young boy thinking his father’s laws were as immutable/as if brought down from Sinai; then through the prism of adolescence his father becomes a foolish small old man/with silly and outmoded views; next, with life’s experience shifting the perspective, the flaws scaled away into the past,/ revealing virtues/ such as honesty, generosity, integrity. Finally, and strangest of all, the persona admits that the older he gets the more the image of the father re-asserts its heroic former stature while the son is left just one more of all the little men/who creep through life/not knee-high to this long-dead god.

As I sit on the back veranda, again soaking up the evening winter sun, I reflect that I am now the same age as Ian Mudie was when he died in London. It is heartening to read that his ashes were brought back to Australia and scattered on the Murray River.

One of the decisions I made fairly early on was that that I would not seek the pedestal position some parents want; that yes, I would be as good a Dad as I could be to my kids but that I would let them see my feet of clay. Some would say that, in this, at least, I was an over-achiever.  The phrase, feet of clay, comes from the Book of Daniel in the Bible and I now realise that I should have chosen another metaphor to puncture childish idolatry

because we are in the presence of yet another hero. Judaic rather than Greco-Roman, a seer and a prophet rather than a strong-man, Daniel divines and interprets the Dream of Nebuchadnezzar where a statue with a gold head, silver arms and breast, copper belly and thighs, iron legs and mixed iron and clay feet is destroyed by a rock.

The Babylonian seers were unable to achieve this and were put to death: Daniel, is raised to power. His companions Shadrach, Meshach, and Abednego survive the fiery furnace. He is able to decipher the mysterious writing on the wall after Nebuchadnezzar’s son and successor Belshazzar has drunk from Jewish temple cups at his feast. The words, Mene, mene, tekel, upharsin, Daniel explains to Belshazzar,

means that God has numbered his days, he has been weighed and found wanting, and his kingdom will be given to his enemies. 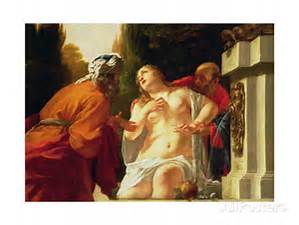 My favourite Daniel story, though, is that of Susanna and the Elders. Two lecherous oldies, spying the naked woman bathing say they will accuse her of meeting with a lover unless she has sex with them. She refuses, is about to be put to death for promiscuity, when Daniel interrupts proceedings and by skilful cross-examination exposes the fraud. The lechers get their comeuppance. Virtue triumphs.