Entry 21: When It Isn’t Heaven- (Howling-adjective-producing a long, doleful cry or wailing sound. Oxford Dictionaries) Now that I no longer have to join the stream of traffic down the 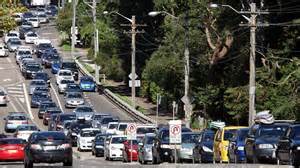 Great Western Highway to access the means to keep the wolf from the door and a roof over our heads, I luxuriate in reading the books, listening to the music and indulging in those sundry, random activities I didn’t have the time or energy for in the “working” phase of my existence.

Leafing through a collection of Banjo Paterson’s verse the other day I came across the lines,  Just now there is a howling drought/That pretty near has starved us out. 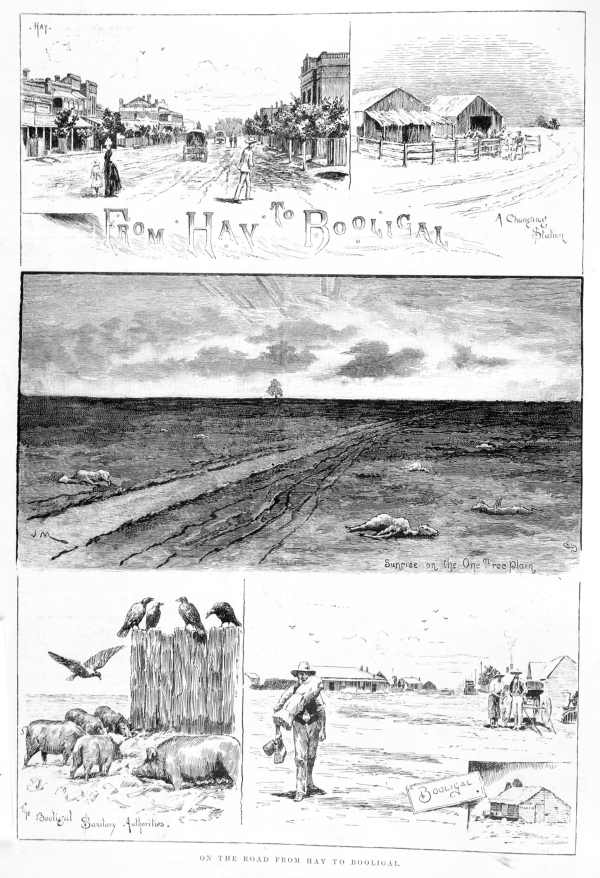 The poem dealt with the hellish conditions in the environs of the western Riverina town of Booligal in the final decades of the 19th Century. A woodcut from The Illustrated Australian News of 1889 shows a barren plain bisected diagonally by a cracked dirt track where the carcasses of animals consumed by the drought lie scattered across this stark tableau. A lone tree on the horizon is etched against the sky where dark clouds mock the arid desolation below.

Paterson treats the subject semi-humorously by having a denizen of the benighted town opine that apart from the isolation, heat, sand, dust, flies, mozzies, snakes and a plague of rabbits…the place ain’t too bad! The speaker concludes by noting that, in the unlikely event of rain, the track would become impassable and they’d be stuck in Booligal. Those listening to him are horrified, ‘We’d have to stop!’ With bated breath/We prayed that both in life and death/Our fate in other lines might fall:/‘Oh, send us to our just reward/‘In Hay or Hell, but, gracious Lord,/‘Deliver us from Booligal!’

For some reason I picture Paul Hogan as the speaker. Australians find humour in the grimmest of situations: the tragic aesthetic does not sit well in the island continent which was earmarked as the dumping ground for the worst elements of British society but which transformed in an astonishingly short time into one of the most desirable residences of the planet Earth. I put down the volume of Paterson’s verse and lifted a dictionary of quotations which opened at a page marked by a decades-old anniversary card from my wife to me.

As I was lifting it out, I read the lines: Howling is the noise of hell, singing the voice of heaven,

according to John Donne in his guise as a preacher rather than poet. Singing and howling exist on a continuum of sound: one person hears music where another hears a racket. Donne was well acquainted with both concepts, heaven and hell, in his life and work. A saturnine, handsome, young Elizabethan blade with the worlds of adventure, love and preferment in front of him as well as travels as a spy and battle experience with the likes of the Earl of Essex and Sir Walter Raleigh, stares out from a portrait painted around 1595 when he was 24.

Fast forward 37 years to the months after his death and we find an engraving of a sunken-cheeked, grizzled, death’s head in a shroud: something to frighten children with.

Engraved by Martin Droeshout, better known for the image of Shakespeare that adorns the First Folio, it is based on a portrait that Donne had commissioned and hung on his wall in his final years to remind him of the transience of life.

As I looked from one image to the other I was reminded of Miyazaki’s 2004 anime, Howl’s Moving Castle, where the 18-year-old protagonist, Sophie, is befriended by Howl, a strange, conflicted wizard, who lives in a magical moving castle. She is turned into an aged crone by the Witch of the Wastes. Perilous journeys, transformations and magical encounters within a surrealistic world lead in the end to Sophie and Howl at the bow of the flying castle sharing a tender kiss- oh, my God, shades of the movie, Titanic! And yet we are suckers for the happy ending, particularly one

sealed with a loving kiss. Such a pity, isn’t it, that such endings are as rare as a blood-red diamond.

Or are they? Tragic love stories attract the limelight: who would rate R+J if the Capulets and Montagues reconciled in time for the young couple to move into a new apartment in Verona and start putting up pictures while arguing over the décor of the ensuite? So, probably, there are lots of happy endings out there, under the radar, under the doona…

The idea of a prescriptive pair-bonding, though, seems quaint in the 21st Century. The ideal nuclear family of the 20th Century has morphed into a range of relational paradigms and you can take your pick of which one suits you. Me? Born in the middle of the 20th Century and married for 44 years, I still look to the old paradigm and I find a surprisingly

poignant connection with Andrew Jackson, 7th President of the United States, when he said shortly before he died: Heaven will be no heaven to me if I do not meet my wife there.