Entry 25: Belfast Calling-There are places of wonder, splendour, adventure and transcendence, I suppose. Most Saturday mornings, I sit on the northeast corner of our veranda and flip through the travel supplement of The Sydney Morning Herald as I sip coffee and listen to the radio. In winter, the sun is low enough to stream under the roof and warm my blood as well as that of the small lizards that bask on the red-brick wall opposite.

In summer, the sun is higher and the same corner is shaded and open to the cooling breeze. Why, then, would I want to be anywhere else? I notice that the grey dollar is avidly sought as cruise operators, glamping spruikers as well as the more traditional bus touring companies display their dream destinations in extravagant, adjective-strewn purple prose promising fulfilment of various kinds…of-a-lifetime, of course. To over-promise and under-deliver seems a feature of life today. Does “awesome” retain even a sliver of its original heft?

My dyspeptic cast of thought is not solely due to the advertising copy before me (some of it masquerading as travel writing) but the thought that I must return to the small box-room that I use as a writing post. There, I’ve left an excerpt from Letter III of a Congregationalist minister writing, in 1852, an account of his meeting with some of my forbears in a small house at the entry of a cul-de-sac in the slums of Belfast. Entitled Walks Among the Poor of Belfast…, it is one of the many printed exposés of the effects of extreme poverty in the industrial cities of the UK at the time. 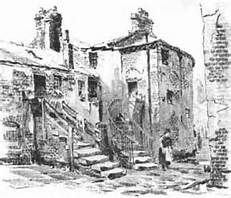 The Reverend W. M. O’Hanlon recounts, the first house we entered was filled with sweeps…it is seldom that even one or two of these dusky ones cross our path without exciting…pity for them…as among the semi-barbarous thralls of society…a conclave of some ten or twelve of them, all duly begrimed, and by no means ashamed to shew their colours, is not an every-day sight. My ancestors of less than two centuries ago reminded the reverend person of, a Pandemonium, only very completely shorn of its terrible sublimity and partaking largely of the burlesque. Deep ignorance is, of course, the prevailing characteristic of this class.

Hardly surprising, if the following testimony is typical, inquiring of one, about eighteen years

of age, if he had ever been at school, his reply was, that he had gone to school when a child, for a few days, but, not being able to make anything of it, he had given it up and ever since he had looked upon “the larnin’ as a mighty strange thing.” George Bernard Shaw, in Pygmalion, has Eliza Doolittle’s father make the ironic distinction between the “deserving” poor and the “undeserving” poor and I wonder if the well-meaning O’Hanlon felt he had discovered one of the former in this next extract:

In this singular group, however, we did find one lad able to read a little, and, having furnished him with the means, we set him to work, for his own benefit and that of his black brethren. What means? What work? I ask myself 163 years later, and I have a feeling there 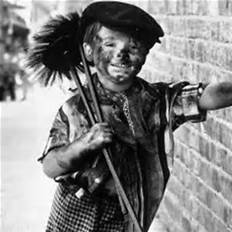 may be a script, poem, song or short story here. But I must put it on the long finger, to use an Irish expression from the time, because I would like to share with you the fact that the straitened circumstances in which the charitable Reverend found members of my clan were a des res in comparison to what was found in a nearby lane,

…in truth, no pure breath of heaven ever enters here; it is tainted and loaded by the most noisome reeking feculence. Surely, we’ve reached the bottom of the pit? But no, there is yet a lower circle in this suburb of hell, still more narrow and wretched containing, I think, nine houses, seven of which, are the abodes of guilt…here every kind of profligacy and crime is carried on…passers of base coin, thieves and prostitutes all herd together…and sounds of blasphemy, shouts of mad debauch, and cries of quarrel and blood are frequently heard here through the livelong night to the annoyance and terror of the neighbourhood…it is the practice of these miscreants to frequent the docks, and, having caught sailors, like unwary birds, in their toils, to allure them into their pitfalls, where they are soon peeled and plundered.

Sounds a bit like Kings Cross of a Saturday night, doesn’t it? O’Hanlon did not live much longer after his encounter with my black brethren and I honour his memory. But, out here on the veranda, as I gaze at the artfully cropped photographs of tourist destinations far and near, I ponder on the images and accounts that are not submitted for my weekend perusal but that would replicate in substance what the Reverend W. M. O’Hanlon

discovered in the city that was my first abode when I left my parents and began my tentative steps as a new husband, a new father and teacher-in-waiting as I dreamt of a new life in Australia: 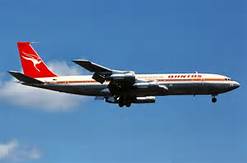