Entry 11: The Mark of Cain- The first crime recorded in Genesis is homicide or, more specifically, fratricide. But this is not the first sin: that preceded the crime. Milton puts it most memorably in the opening lines of the great Paradise Lost:

Of Man’s first disobedience, and the fruit Of that forbidden tree whose mortal taste Brought death into the World, and all our woe, With loss of Eden, till one greater Man Restore us, and regain the blissful seat, Sing Heavenly Muse, that, on the secret top Of Oreb, or of Sinai, didst inspire That shepherd who first taught the chosen seed In the beginning how the heavens and earth rose out of Chaos. 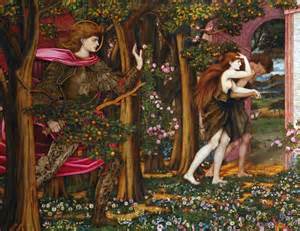 The mortal taste of the forbidden fruit results in the expulsion from Eden and we find Adam and Eve wandering east of Eden dressed in garments of skin. God places an angel with a flaming sword at the entrance to the garden to prevent the pair, who now have knowledge of good and evil, from returning to eat from the tree of life and thus become immortal. God had cursed the deceiving serpent and also the ground so that humanity would have to struggle against weeds and blight to bring forth sustenance: as the King James version puts it:

…cursed is the ground for thy sake; in sorrow shalt thou eat of it all the days of thy life; Thorns also

and thistles shall it bring forth to thee; In the sweat of thy face shalt thou eat bread, till thou return unto the ground; for out of it wast thou taken: for dust thou art, and unto dust shalt thou return.

Interesting, from the point of view of a contemporary audience, is the paucity of detail surrounding the murder of Abel by his brother Cain. We are used to printed and visual texts going into minute detail about motivation and the process leading up to the act of murder itself. Basically all we are told is that God accepted Abel’s offering over Cain’s. Cain gets in a snit. Then they go out into the field where, in the words of the King James Bible, Cain rose up against his brother Abel, and slew him.

That’s it. Nothing more. The aftermath is more detailed, of course. When God enquires after Abel, Cain replies with the famous line: Am I my brother’s keeper? God then condemns Cain to roam the earth as a fugitive and a vagabond, unable to till the ground as it has drunk the blood of his brother. When Cain complains that he will be a marked man (and here we need not

examine too closely where the other people who would harm Cain might have come from) God replies: Whosoever slayeth Cain, vengeance shall be taken on him sevenfold. And the Lord set a mark upon Cain, lest any finding him should kill him.

So, originally the mark of Cain was divine protection! Fratricide has been a feature of legend, history and society from this time: In The Antigone, by Sophocles, Eteocles and Polyneices kill each other by stabbing one another through the heart; Romulus kills Remus and founds the city of Rome- setting the stage for lots of family killings down through the

centuries. In Hamlet, Claudius kills his brother, the king to grab the throne and Queen Gertrude.

At about the same time as the composition of Hamlet, it was not a recipe for long life to be the brother of the Sultan of the Ottoman Empire. In the reign of Mehmet III, upon the birth

of a male heir to the throne, nineteen of his brothers were strangled with silk cords and buried with their father. In contemporary popular culture, Michael Coreleone kills his brother in The Godfather, Part Two and, in Disney’s The Lion King, Scar kills his brother Mufasa.

In the mid-1980s, I had been successful in writing a TV and a radio drama for the Irish broadcaster, RTE, both of which incorporated music as part of the drama. I then started to write a TV show for Ulster TV called The Last Country Band in Ireland, and as a preparation for this I had listened to countless hours of country music from Ireland and the US. The show was to open with a showdown using the 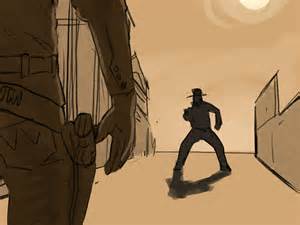 cliché of two gunslingers facing one another in a western setting- saloon bar, horse stables, goods store, sheriff’s office and frontier damsels with handkerchiefs raised in horror to their faces.

The song would play over the opening sequence leading to the shoot-out, when the camera would pan back and we would see the backdrop to be a contemporary Ulster setting. I had a lunchtime meeting with one of the station’s producers and everything seemed promising.

Then, the opportunity to return to Australia fell in my lap and, with only six months to avail myself of this prospect, I did not have time to complete the script and the process and make the arrangements for the move back to Australia. But I did have the time to write a few songs in the genre. I had chosen this song to open the show, which, like too many other ideas, lies stillborn in a file somewhere in the loft or garage. But here’s the song: