Entry 5: Changes- Don’t you love creation myths? The question, Where do we come from? is swiftly followed by Where are we going? The latter question may be addressed in a later 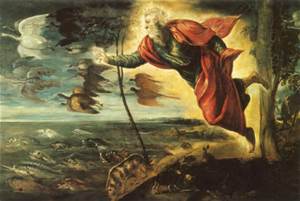 entry but for now I’ll talk about beginnings. Genesis was the earliest myth I encountered, with its poetry and puzzles. Later, I found other accounts to puzzle and delight me.

The Chinese creation myth is one example. According to my muse, Wikipedia, the creator, 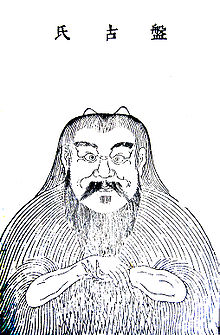 a being named Pangu, slept on, or perhaps in, a black egg of chaos and when the principles of Ying and Yang were perfectly poised, the whole shebang kicked off. Somewhere in the mix, a bit later on I guess, were brother and sister, Fu Xi and Nü Wa who were the original humans.

One day, for reasons I couldn’t discover, they set up two separated piles of fire, and the fire eventually became one. Then, under the fire they decided to become husband and wife. Fu Xi subsequently observed the patterns of the world and created the eight trigrams, in order to become thoroughly conversant with the numinous and bright and to classify the myriad things.

This becomes the basis of Taoist and Confucian divination that we know as the I Ching, which is a canonical text among New Agers, but has a wider cultural currency. Most people know about the system for divination using the throwing of sticks to form a pattern or 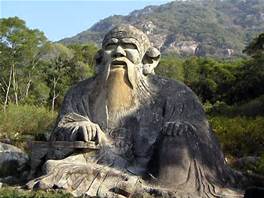 generating random numbers in a computer to access the 64 hexagrams- all very abstruse and interesting in its own way, but not really what I want to talk about- I was simply struck by the fact, as I was fossicking through the website, that I Ching translates as Changes– the name of my song.

As Chrissie Hynde sings, in her composition, Hymn to Her “some things change, some stay the same” Change and Stasis- opposed yet linked concepts have intrigued people other than Chrissie from the beginning, I would wager. But, for my money, the best explication of this duality is John Keats’ Ode to a Grecian Urn. On the urn is depicted a scene from a Greek idyll featuring gods, perhaps, lovers and musicians trapped in time forever and the subject of future generations’ perusal and inquiry. The closing lines are among the most famous in all literature:

When old age shall this generation waste, /Thou shalt remain, in midst of other woe/ Than ours, a 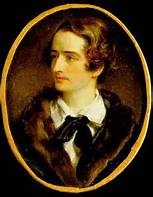 friend to man, to whom thou say’st, /”Beauty is truth, truth beauty,—that is all/Ye know on earth, and all ye need to know.” 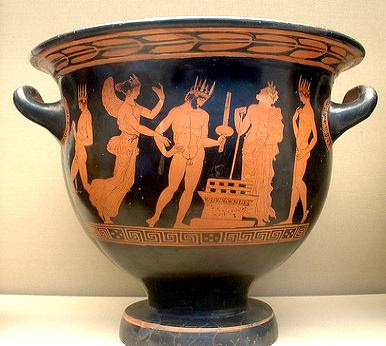 Well, actually, we do need to know a bit more. But I applaud the genius that wrote those words and who perished way too early: which reminds me of Stephen Spender’s poem, I Think Continually of Those Who Were Truly Great He was only 21 and thinking about sex and Beethoven and Michelangelo when he wrote this poem containing the lines:

What is precious is never to forget/The essential delight of
the blood drawn from ageless springs/ breaking through rocks in worlds before our earth…/Never to allow gradually the traffic to smother/with noise and fog the flowering of the spirit.

This echoes the great Wordsworth sonnet:

The world is too much with us; late and soon/ Getting and spending we lay waste our powers/ Little 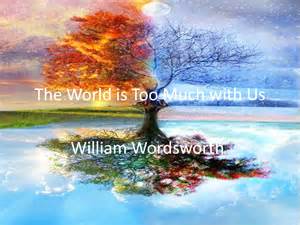 we see in nature that is ours/ We have given our hearts away: a sordid boon!

God, how I love words such as these, used by those who are truly great. So this brings me back to where this entry started- The Bible: not the Old Testament, but the New, where the Gospel of John begins…here it is in Latin– In principio erat verbum et Verbum erat apud Deum et Deus erat Verbum: In the English of the King James Bible it renders as, In the beginning was the Word, and the Word was with God, and the Word was God. But the Logos-which is Greek for Word– doesn’t originate with John but can be traced back to Heraclitus- 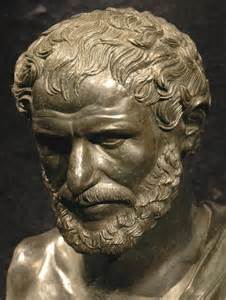 you know, the dude who said you couldn’t step in the same stream twice.

Were I asked to give my tuppence worth, which, godlike, and within the confines of this journal, I can, I’d say something like “the Word, the Logos, is not passive; a mere spoken or written construct containing, signs, signals and information. Rather, it is like an utterance of power from a Bach chorale strung out eternally, sung by a chorus of angels with attendant seraphim ringing all the changes, and surpassing, to the nth degree, the music of the spheres.”

Lord, that exercise in verbosity has given me the head-staggers and while I would wish to

be able, like Fu Xi, to study the patterns of the world in order to become thoroughly conversant with the numinous and bright, I think I’ll have to be content to pick up my guitar, strum a few chords, look at the ceiling and try to draw down inspiration from Calliope, Erato  and Euterpe, the three sisters who are daughters of mighty Zeus and the muses of poetry and music.