Entry 2: Let Them Not Fade Away- In the previous entry, I stated that were I an ancient Greek, my name would be Procrastis but I’ve been wondering, in my usual desultory fashion, if I might not, with more accuracy, have taken the ancient Greek name of Procrustes.

And here I defer once more to the oracular Wikipedia: In the Greek myth, Procrustes was a son of Poseidon with a stronghold on Mount Korydallos at Erineus, on the sacred way between Athens and Eleusis There he had an iron bed, in which he invited every passer-by to spend the night, and where he set to work on them with his smith’s hammer, to stretch them to fit. In later tellings, if the

guest proved too tall, Procrustes would amputate the excess length; nobody ever fit the bed exactly, because secretly Procrustes had two beds. Procrustes continued his reign of terror until he was captured by Theseus, travelling to Athens along the sacred way, who “fitted” Procrustes to his own bed: He killed Damastes, surnamed Procrustes, by compelling him to make his own body fit his bed, as he had been wont to do with those of strangers. And he did this in imitation of Heracles. For that hero punished those who offered him violence in the manner in which they had plotted to serve him. 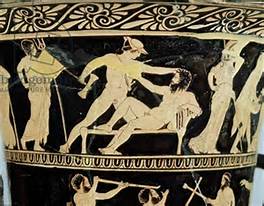 Are not all artists Procrustes? Here am I, shaping a journalistic narrative around a series of songs by selecting and editing bits and pieces from the world of letters. I suppose this is a cautionary note: don’t get seduced by the notion that any of this represents anything other than itself. On the other hand, unlike the original Procrustes, I hope that any idea for a song that is passing by survives the smith’s hammer of my imagination as I struggle to shape it into something pleasing.

I am a baby boomer as I mentioned before, and, as a teenager during the years 1963 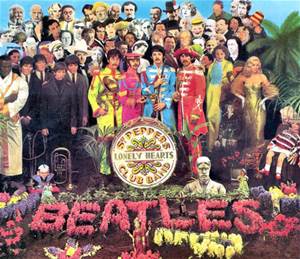 through 1969, was staggered at the brilliance and variety of music being produced in this period. The Beatles, the Stones, the Beach Boys, the Who, Hendrix and Cream were among those who formed one pole of my musical life and I was reassured that my birthplace could supply artists such as Van Morrison with Them and Rory Gallagher with Taste who provided an Irish accent for the Rock/Pop pole of my life.

Also going on, was the folk revival and The Clancy Brothers with Tommy Makem, the Dubliners, the Chieftains, Planxty and the Fureys formed the other pole of my musical world. Linking both, I suppose was the towering figure of Bob Dylan, who remains, along with some of the artists listed, a formidable and forming influence to this day, as you will hear, no doubt as you listen to the songs at the core of each entry.

The earth keeps some vibration going/There in your heart, and that is you./And if the people find you can fiddle,/Why fiddle you must for all of your life…

So writes Edgar Lee Masters, an American poet writing in the late 19th, early 20th Centuries. He writes about how this vibration prevents a man from doing anything with his forty-acre farm and how he, because of this vibration, missed out on the joys of everyday social interaction as a result. I, myself, don’t have a forty-acre farm, but a detached, suburban block in an outer suburb of Sydney.

I am often reminded that, rather than toiling in this 21st Century version of the smithy, which is a small box-room with its computer, printer, internet connection and assorted musical instruments, I should be outside cutting the grass, tidying the yard, painting the deck, planting a garden, clearing the gutters- and that’s just for starters!

Like most people, I was torn between what I wanted to do and what I had to do to keep the wolf from the door. For years, I felt the weight of Philip Larkin’s poem Toads: Why should I let the toad work/ Squat in my life and for well over four, long, decades I have known that something sufficiently toad-like/ Squats in me, too.

But back to the American poet, Masters: he is remembered today for a work that is an interesting amalgam of free verse, epitaphs and monologues from the dead in a cemetery in Illinois entitled Spoon River Anthology. The poem I am quoting from is called Fiddler Jones and I love the four lines with which he concludes his poem:

In my mid-forties, I helped form a group called Banter playing folk music from Ireland, primarily; but there were lots of Australian songs and tunes in our repertoire, as well. We also featured music from elsewhere in the English-speaking world. From my mid-teens, I have felt, like Masters, that the earth keeps some vibration going there in your heart and that is you: and, despite a life lived under the toad squatting inexorably on my dreams, I wrote this song about my musical roots: